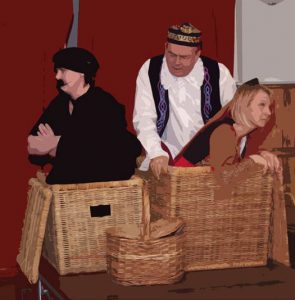 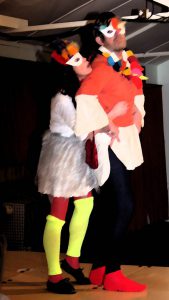 The Canterbury Tales is a collection of stories written by Geoffrey Chaucer in the 14th Century. The Tales are told as part of a story- telling contest by a jovial Company of Pilgrims as they travel together to the shrine of Saint Thomas Beckett.

The word ‘company’ comes from the Latin com – ‘with’ and pane – ‘bread’; people with whom one breaks bread. Many of Chaucer’s pilgrims end their stories by wishing the ‘compaignye’ well. In a more abstract sense, it was the term designated to connect a group of people engaged in a particular business, as it is used today.

The company of pilgrims came from different parts of society, the Court, the Church, villages, the Feudal Manor System. To prevent argument, they created an informal company, united by their jobs as storytellers, and by the food and drink they shared.

Story telling was the main entertainment of the day and it was customary for a ‘master of ceremonies’ to organise a group and then present the winner with a crown or a free meal.

Phil Woods and Michael Bogdanov wrote this version, because they felt that ‘Chaucer had been seen as daunting and inaccessible by too many people for too long’, and resolved to do something about it.

Our production, then, is not trying too hard to engage the grey matter, but trying unabashedly to amuse, entertain and to provide humorous insights into the human condition which are as relevant now as they were in the 14th Century.