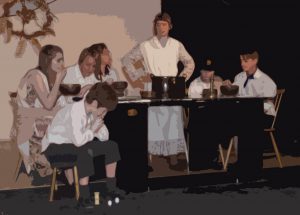 This play is a stage adaptation of Laurie Lee’s autobiography set in rural Gloucestershire in the period soon after World War One. It tells of Lee’s childhood, remembered and narrated by him as an adult; his chaotic but loving family, his unforgettable schooldays, the village eccentrics, annual outings, his first taste of cider and his sexual awakening. It chronicles the demise of village life and reflects on a world that has long disappeared, a world where life was peaceful, slow and governed mainly by the seasons.

Following weeks of play readings last year, HAMS selected this play from a shortlist of six. Although not the easy option, the group has worked hard together for many months, sharing ideas and expertise in or-der to bring this classic story to life on the stage to the best of our ability.

One exciting development this year has been the inclusion of children and young people in the cast, some from East Hagbourne and two ‘borrowed’ from Goring! Their ideas, energy, enthusiasm and talent have impressed us all and there is no doubt that this production is the better for having had them among us.